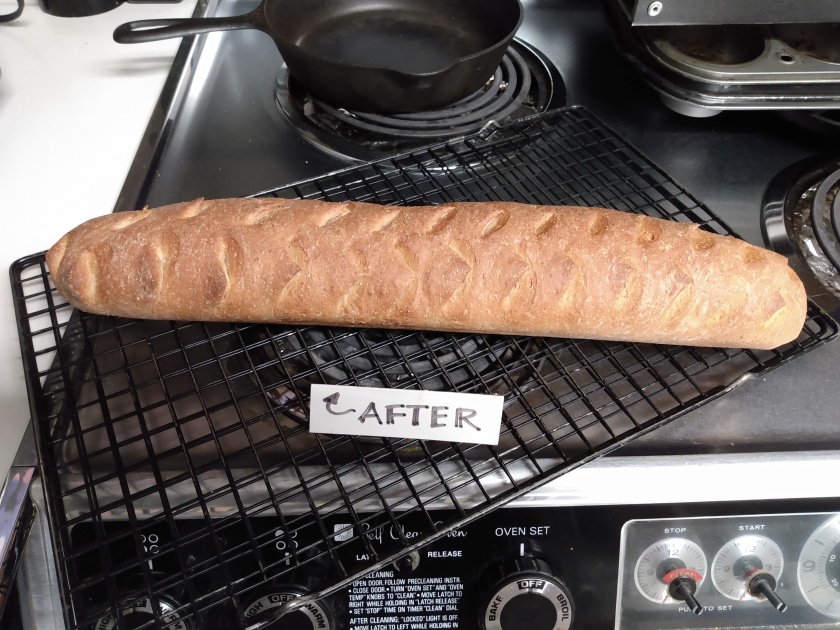 I’m so thankful I learned how to do this without the luxury of my bread machine.

Link to the book I learned from is in the caption, below.

I know this has been going on for a few years, but here’s the latest at Breitbart.

Posted the following just now on an old Hollywood Reporter piece, but as I probably won’t take the time to write a true essay on what I thought about the film (we went to it yesterday) this will have to suffice (I may add more thoughts below the quotes):

Does Dinesh D’Souza’s new film have flaws? Sure. But what “mainstream” Hollywood docu-drama doesn’t? What “America” does (and I wish it’s had done it more forcefully) is point out the many hypocrisies of the country’s leftists: lies in revered history book by Zinn; feigned or actual ignorance of Native American warfare on their own kind(s) as well as history of Columbus by an outspoken Native American activist; ludicrousness of N.A. “reparations” for now-developed land (Manhattan) vs. purchase of raw land; Mexicans pining for and illegally “resettling” former Mex-territory that was actually pad for by US; etc. Yes, the U.S.A.: broke treaties w/ and horribly mistreated/rounded-up N.A. (but NOT ME); condoned black African slavery (incl. 1000’s of BLACK slave owners!) & white-Irish slavery (but NOT ME); has 100’s of military (industrially-complex) set-ups around the globe (but NOT ME or not by my voluntary support). I will NOT make reparations for crimes I did not commit. I’m thankful for the film, America, if for no other reason than pointing out some of these things.

Oh, and the film’s point about Slaves-having-fruits-of-their-labor-STOLEN, so having no incentive to work hard or well? Excellent, BUT…it’s no longer an excuse for black-poverty today. D’Souza’s film segment on the pretty much forgotten (she got a stamp in 1998 (http://tinyurl.com/ojfup5k)) history of the FIRST $millionaire African-American WOMAN (Madam C.J. Walker) just after the turn of the 20th century? PRICELESS!

The film certainly comes across as Rah! Rah! A-‘mer-i-‘cah, but seriously, watch that trailer; see how D’Souza will give screen time to his ideological opponents (name-callers might say, “America-bashers”). Do leftist filmsters do the same? No. Even close? No, again.

And in the linked trailer, listen to Noam Chomsky @ 1:40 first claim how “destructive” so-called Capitalism is (in reality it’s politically-connected/coerced/beleaguered CRAP-italism). Chomp-ski follows it up by suggesting this business-model is even MORE destructive than “centralized Federal Power” (is he so stupid he doesn’t hear himself; that Fed-gov power is “what” always did, and continues to, wage those foreign wars of oppression!). Best of all he then suggests these evil CRAPitalists be “constrained in some way!” OMG. He did a flip-flop in about 5 seconds. Does he NOT GET that this means Fed-gov must aggress again, against civilians at home; must use GUNS or the threat of guns-plus-imprisonment to keep businesses in line.

[Just how stupid – or inconsistent – do you have to be to be REVERED by the political Left (sorry, rhetorical question)?]

My wishes for the film were numerous.

There has always been Conquest; there has always been Slavery. America does not hide from it’s past, but around the world today there is no one whose “ancestors” haven’t done some sort of heinous wrong. If all are guilty, all are potential decendents-of-victims so where does that leave the Reparations People? In a globe-sized circle of people with their hands out.

The most Guilt-Ridden will pay. The most easily provoked to that guilt it seems are White Americans of European descent. I’m sure it’s just a coincidence we are the most charitable with our personal monies and as a country, the most generous with our handouts.

AG Eric the Holder and his peeps will never be indicted on these [“Fast and Furious”] gun-running crimes which resulted in 1000’s of dead Mexicans and a few dead Americans (surprise) nor will any Feds who would entertain the traitorous thoughts of such information-sharing with a foreign government get what they deserve.

“Mexico wants a gun registry in the Southwest US”

Mexico’s Congress voted to formally ask the United States Senate to create a registry of all commercialized firearms in the states of California, Arizona, New Mexico, and Texas. Although the motion will have little impact in the US, it shows the gun control issue continues to resonate on both sides of the border….

Okay, I admit it: I like little paintings because they make me feel like a god. All the time, not just at the end after everything has been figured out and worked out and has ultimately become a veritable color & shape tune that hums and makes me feel better just by glancing at it.

So this is a foray taken yesterday afternoon (and “touched up” this morning) into Bigger-is-Scarier-but-clearly-not-impossible. (I used to work on “quarter-sheets” so it’s not like I’m a total wimp.) Here’s the photo-inspiration.

Up”date”: Um-m-m…earth-to-Patrice. The signature line’s date on this should have been “july” not june.